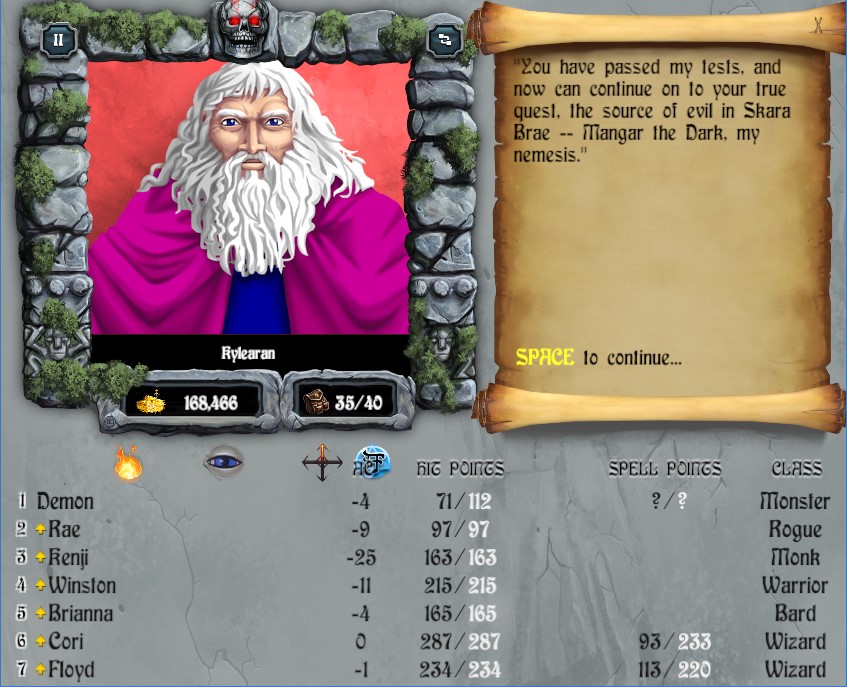 I've been a fan of the Bard's Tale series since way back in the 1980s. In fact, it was one of my first introductions to the world of computer role-playing games. So, when InXile announced a remastered version, of course I had to get it.

Now that I've played it and been able to compare the new version to the original, I'm happy to bring some of my thoughts to the rest of the retro-gamers out there, plus anyone who is discovering the series for the first time.

The information on this page mostly pertains to Bard's Tale 1. Bard's Tale 2 and 3 will be covered in future posts.

The remastered Bard's Tale games all share the same basic UI. It's similar in layout to the originals, with a party listing, a 3D city/dungeon view, and an output area showing the latest adventring and combat messages. The party is still limited to square-based movement, but the city/dungeon view is fully 3D and even allows a limited amount of mouselook to get a better view of your surroundings.

As for the graphics, they're very well done. The building and monster images have all been remade. They're generally similar to the originals, but much, much better. Buildings have different shapes, some one-story and some two-story. Mangar's Tower is a five-story black monolith that looms over the southwest corner of Skara Brae. Buildings like the Adventurer's Guild and taverns have signs that extend out over the street. And there are portcullises which open when your party steps under them.

In the dungeons, the walls have been redone, looking different for each dungeon. The walls inside Mangar's Tower even have a little movie sequence in them, with various skeletal creatures and even Mangar himself appearing to look at you from the walls.

The lighting effects gained a lot from the 3D engine, too. Buildings cast shadows on other buildings, most noticeably at dawn and in the afternoon. Down in a dungeon, if Locate Traps or Second Sight is active, you can now see the traps and spinners. Traps appear as glowing swirls on the floor, and spinners appear as a shadowy vortex stretching from the floor to the ceiling. When you cast Trap Zap, lightning bolts shoot out from the party and sparks fly from the traps as they're disarmed! (Pro tip: you can use this effect for a brief flash of light in darkness zones.)

The sound has improved even more, in my opinion. In classic Bard's Tale (at least, the DOS version) the music quality was poor enough I always ended up playing on mute. In the remastered version, the songs are more MIDI-quality and are pleasant enough that I played the entire game with the volume turned on, and never got tired of it. The music even changes depending on whether your Bard is using a mandolin, flute, or drums!

The general game play is very similar to the classic Bard's Tale games. You crawl around the cities and dungeons by moving from one 10'x10' map square to another. The maps are also almost exactly the same as the originals. So, if you mapped the originals years ago on graph paper like I did, your old maps will still work.

That said, there are several game play changes which are worth mentioning.

The original version of Bard's Tale 1 gave you seven party slots, but one of them was the "Special" slot which could only be occupied by an NPC or friendly monster. The Special slot was always in the front of the party, which is fine with a Red Dragon or Thor, but not so useful when you summoned a mage. The remastered version gives you party control similar to the original Bard's Tale 2 and 3, where you can place a special member anywhere in the party order, or have two special members, or even forget the NPCs and keep 7 party members.

Did I mention that party members can be male or female now? Score one point for gender equality!

This is one of the biggest improvements, in my opinion. Your party has a single, unified inventory and gold stash. No more trading items from one member to another, and no more pooling your gold to buy spells or healing. The party can carry 40 items, in addition to everything the members are wearing. So, the total ends up being more like 70-80 items!

In classic Bard's Tale 1, usable items like wands and instruments didn't have a fixed number of charges; they just had a 1/64 chance of randomly disappearing when used. The remastered version gives them a countable number of charges, just like in classic Bard's Tale 2 and 3. This is a nice improvement, I think. It's always annoying when you're halfway up Mangar's Tower and your Flame Horn suddenly disappears!

Garth's Shoppe gained a few new interface tweaks, as well. Characters will automatically equip items they buy, if they don't already have an item of the same type equipped. Plus, the items the character can't use are highlighted in red.

One thing bothered me a bit about the shoppe, though. In classic Bard's Tale 2, you could sell a nearly used-up charged items to Garth and then buy them back with full charges. The remastered version takes this away; non-fully-charged items will now disappear from Garth's stock when you leave the shoppe. I'm actually fine with the developers fixing that loophole; my complaint is that you can no longer sell certain items to Garth to free up inventory spots, then buy them back a few dungeons later when you need them (this will be more important in Bard's Tale 2, when you need to save up certain items for the magic-proof Grey Crypt.)

There have been a number of changes to the game play, and especially to the spell lists. Some are done to make the three games of the trilogy more similar, while others were done to eliminate some of the annoyances of the originals, or even to reduce grinding. (A game in 2018 trying to reduce grinding? Who'd have thunk?)

The first thing I noticed is that characters take 1/2 as much experience to advance as in the originals. This means you level up very quickly and there's really not much grinding required at all. In fact, some of the former grinding spots (Catacombs level 3, and the big Berserker fight) are now one-time-only fights and can't be revisited for more experience. This is actually fine. Due to the reduced experience requirements, my mages had all hit level 13 Wizard by the time I was on level 2 of Mangar's Tower.

The second big change is the combat distances. Bard's Tale 1 has gained 10'-90' distances for monster groups, similar to the later classic games. This requires some re-thinking of strategy, but not too much.

One spell I didn't mention above is Rimefang, an all-group attack spell from classic Bard's Tale 3. That one does not appear in this game; I later found out it's been moved to level 1 Archmage, along with Wind Mage, which is now a level 2 Archmage spell. So you'll have to wait until Bard's Tale 2 for those. This is probably a good thing, because Rimefang's 50-200 damage would have flattened almost anything in Mangar's Tower.

Watch out for those traps!

The traps in this version of the game are very powerful. I found my characters dead or possessed lots of times, just from stepping on one wee little trap I would have just shrugged off in the classic games. So, keep your Locate Traps or Second Sight spell going all the time, and cast Trap Zap any time you spot something. You'll be happy you did. (Also, the special effects never got old.)

Aside from the magic changes above, the Rogue also has the improved Hide in Shadows and backstab critical hit attack from classic BT3. She is also the only character who can disarm traps. (In the classic game, any character could try, even if they weren't good at it.) But, even with that, I still found my Rogue to be a weak-ish character who died a lot in the later part of the game due to low HP. Unlike classic BT3, hiding in shadows doesn't protect you from group spells or breath weapons.

The character detail screen (accessed by pressing the key of they slot number, or clicking their name) now shows some additional info. Notably, you can see their melee damage, along with critical hit and trap disarm odds. You'll need to get some of the percentages way over 100%, because trap disarming gets way harder the deeper you go in the dungeons.

The game contains an automatic mapping engine, which is one of the coolest new features. There's a mini-map inside the 3D screen and also a full auto-map in the Journal. This records all the writing you find on the walls, and the Magic Mouths, and so on. It also shows icons for traps, spinners, fixed monster encounters, and more.

Note that the auto-map gets confused by teleport squares. (Kind of makes sense, doesn't it?) Whenever you get teleported, you need to cast Scry Site to determine where you are. Otherwise the auto-map will stop mapping until the party casts Scry Site. If you forget to do this, you might have to go back and walk through some tunnels to get them to appear on the auto-map.

Minor nitpick: The teleport squares produce a faint shimmering on the 3D screen when you get teleported, but it's not very noticeable and easy to overlook. Unlike Apport Arcane, which gives off a big light show (and doesn't pause the auto-mapping.)

And a few more things...

I noticed a few other changes while playing, that might be worth mentioning.

Once you finish this game, it's a piece of cake to import your party into the remastered Bard's Tale 2. That uses the same game engine and has a few other notable upgrades, which you can read about in my next review. Happy gaming!